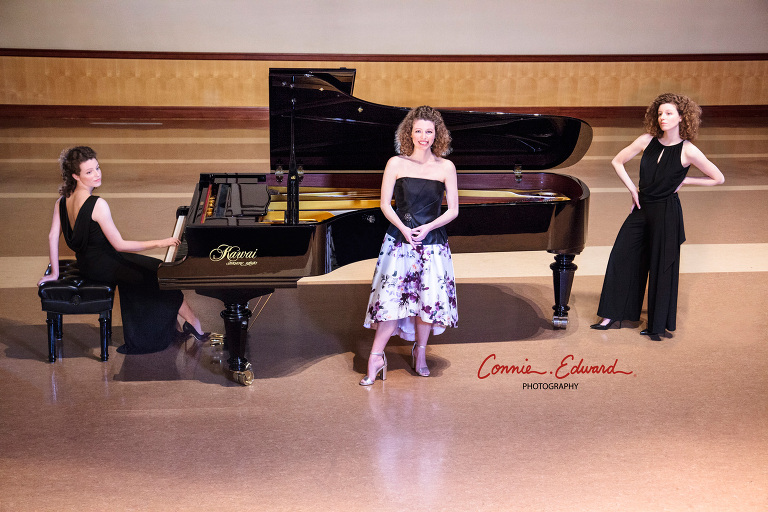 Planning Maddie’s Senior Recital portrait took quite a bit of brainstorming, but was worth the preparation! We mutually agreed from the start that she would be posing beside the Shigeru Kawai grand piano at the Hall-Musco Conservatory of Music. We chose this setting not only because its location was readily available upon student request, but also because she had grown to feel naturally comfortable in front of it while participating in several of her friend’s recitals (including some of her own) during her soon-to-be four-year stay at Chapman University. It is the tradition for Chapman College of Performing Arts musicians to create recital posters to promote the date, time and place of their recital and as an on-campus invitation to all.

Once, we had chosen a location, our next step was to think about the different posing possibilities, and when you get two creative personalities to collaborate, the ideas can be endless. During one particular dinner outing with her and her boyfriend Steven, we began to discuss character traits, which led me to mention the of “three faces”. The concept of “three faces” is of the idea of how we share different characters of our personality depending on the type of audience we are in front of; the first face we share to the world, the second face we share to our close friends and family, and the third face we never show to anyone.

After becoming intrigued by this idea, we decided to use the concept and landed on the process of developing a three-person composite image to capture this idea. This also was a good inspirational point, as it led us to the three-image composite as a means of drawing away from the “typical” one-person subject matter. Much detailed planning took place in creating this composite, from the shopping of the wardrobe to the angle of view and in-camera framing. This last step was crucial during this photo shoot because our framing would have to be identical in all three shots to assure an easy workflow in post-process when creating the composite image.

After a few hours of focused, but rewarding, shooting, we had successfully captured three images that perfectly summated Maddie’s version of the “three faces” proverb, and after a bit of post-process work, we ended up with a gorgeous composite image, perfect for use for this talented beauty’s senior recital posters!  It was my honor to be a part of crafting a memory for this graduating senior, commemorating a wonderful milestone on what will be a long, fruitful musical and personal journey!

Centralized in the greater Los Angeles area and happily serving all of California and more!